If you read my last post, you’ll know that I recently went to New York City for the first time. We were there for a week and wanted to squeeze as much tourist related things in as possible. The first three days of our trip had already seen us visit Times Square, Empire State Building, American Museum of Natural History, Central Park, Top of the Rock and the Staten Island Ferry.

We stopped by Grand Central on the Friday before breakfast and were amazed by how stunning the architecture was. It’s one of those places that when you see it on TV or in films, it doesn’t quite do it justice.

After breakfast we went back to Central Park, this time to visit the zoo. There are plenty of zoos in and around New York but Tom and I love penguins and Central Park Zoo had four different species. It was strange to walk around looking at red pandas, sea lions and grizzly bears whilst being able to see the towering skyscrapers. It was definitely a zoo with a view.

While we were in Central Park we decided to find the Gapstow Bridge from Home Alone 2: Lost in New York. It had to be done as it’s one of my favourite films. 5 minutes over the road is the Plaza, which is the hotel featured in the film. We looked around the concourse at the different bars and shops and even stopped by the lobby which was so luxurious. 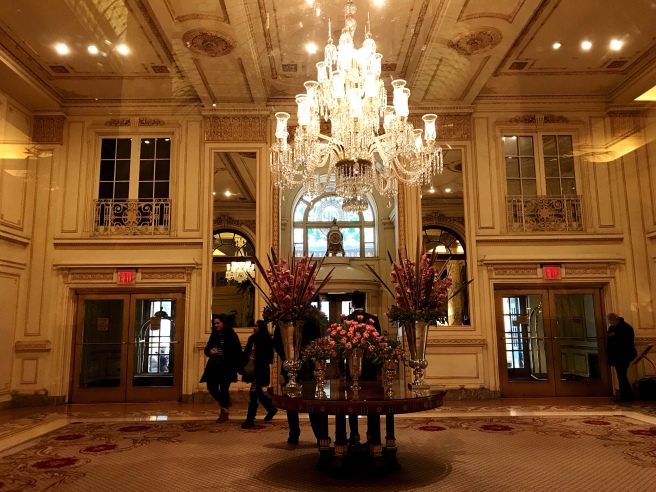 On Friday evening we went to Southern Hospitality for light snacks before the Rangers game. The ‘snacks’ we ordered turned out to be even bigger portions than we would get here in the UK! I was so full that even the thought of getting food at the game was a big no. The game itself was the New York Rangers v Calgary Flames at one of the most famous arenas in the world, Madison Square Garden. It was so surreal being there and even though the Rangers were having a bad run of games before this (they were beaten 6-1 by Boston Bruins on the Wednesday) Rangers managed to beat Calgary Flames 4-3. 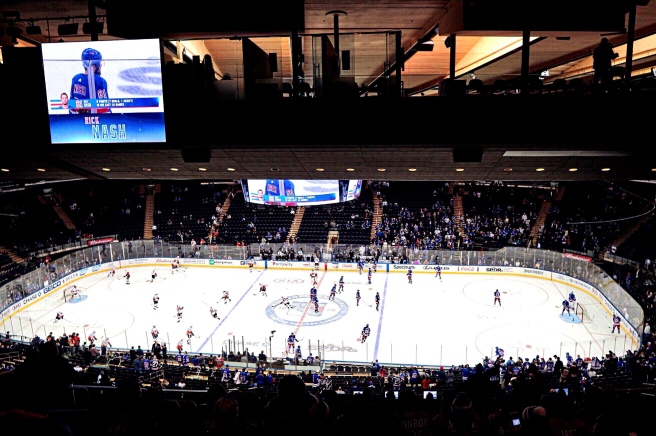 Although we had made plans to visit the 9/11 memorial museum on Saturday, a mixture of bad weather and tiredness kicking in put those plans on hold. Instead, we popped along to the New York Public Library to check out their stunning rooms and we were not disappointed. 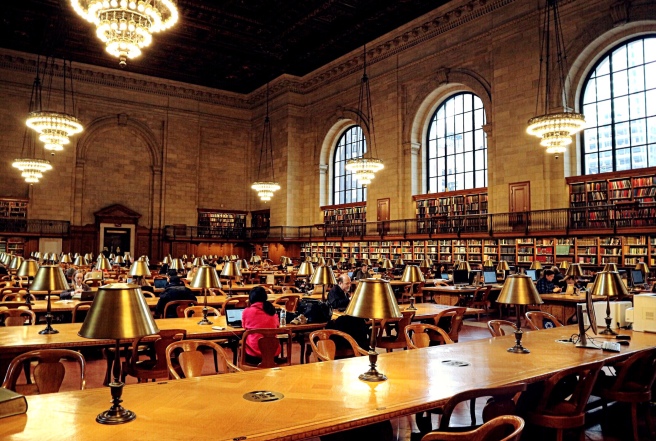 Seriously how stunning is that? It certainly brightened up our day and we were glad we went along. We decided to relax for the rest of the day and went to Carragher’s, which is a pub dedicated to Liverpool FC. Being a LFC fan myself, I felt right at home and the bartender was really friendly. After some drinks we were in much need of some yummy food and there was one place (actually there were quite a few) we still needed to check off the list, Junior’s Cheesecake. We got some food there and a cheesecake for dessert, but it was so big that we had to take the rest to go.

We wanted to pack in as much as we could on the last day so after breakfast, despite the heavy rain we set off to the High Line. For those who aren’t familiar with it, the High Line is one of New York’s most popular attractions. It’s a disused rail track which was turned into a public park and features some amazing (and odd) outdoor art, wildflowers and greenery. I imagine it would be absolutely stunning when the sun is shining and the flowers are in bloom. It has some amazing views of the city too, so definitely worth visiting. 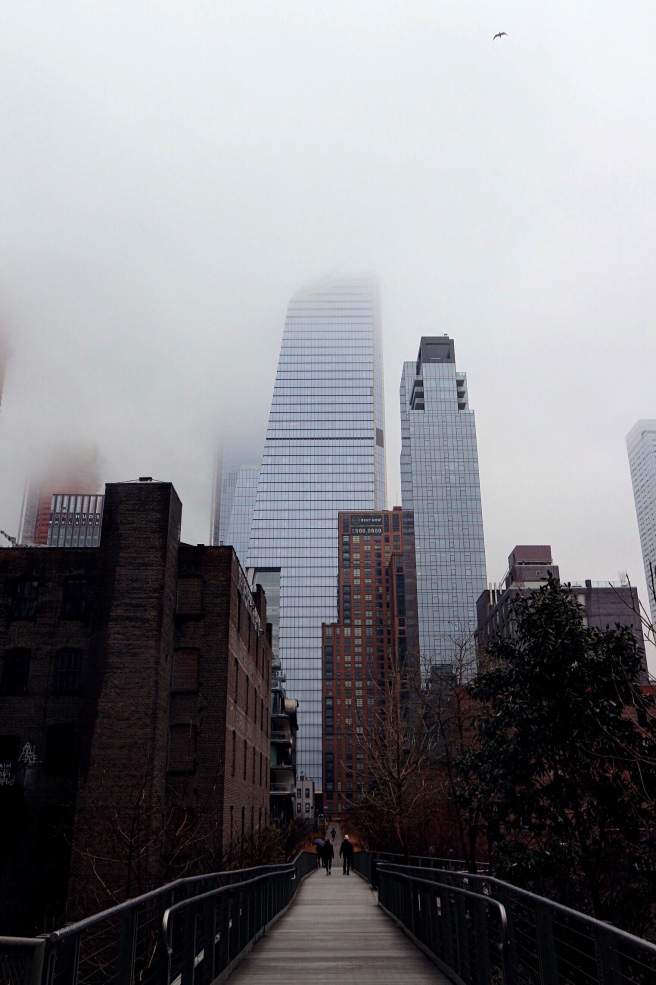 Fog was starting to descend over the skyscrapers as we made our way along the 1.45 mile track, which was quite cool and creepy to see. Once we’d walked the majority of the High Line, we made our way to the 9/11 Memorial & Museum. The museum commemorates the lives of those who died in the Twin Tower attacks. The memorial features two huge waterfalls were the Twin Towers originally stood and each persons name is inscribed. Every year on the birthday of each victim, they place a white rose next to their name. It really was a moving experience to see.

At this point in the day, the rain had somehow gotten worse but we still had the Brooklyn Bridge to tick off our list of things to see. In hindsight, we probably should have left it, as we were absolutely drenched, but I knew I’d be kicking myself if I didn’t at least try and see it. So off we went in the pouring down rain to walk across the bridge. We managed to get halfway before we gave up. The rain was coming down so much (and the fog was still looming) that the lovely picturesque Manhattan skyline that we’ve all seen in photos, was just about visible. I could just about get some photos before my phone and camera were soaked. 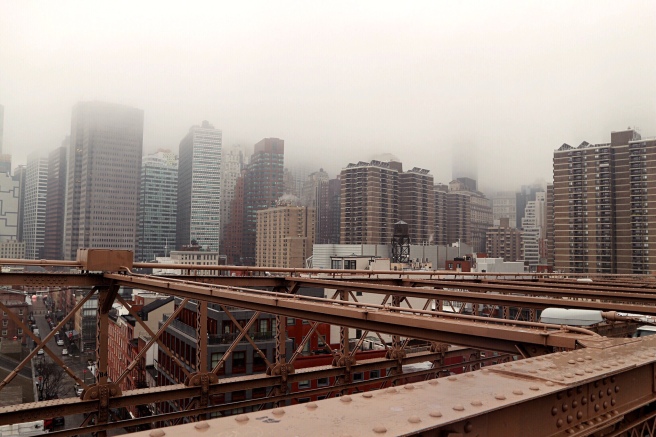 But even New York on a very wet and miserable day is better than most places. We headed back to our hotel for a much needed change of clothes and dried off before one last outing in New York for food and drinks.

New York was just as incredible and amazing as I imagined it would be. I can’t wait to go back again, which will hopefully be sooner rather than later (and warmer perhaps?) A week in New York was definitely not long enough.

2 thoughts on “A Week in New York City: Part Two”

I’m Nicola, a UK lifestyle blogger from Liverpool with a love for food, photography and anything nautical.

Want to get in touch? fishbowllifeblog@gmail.com