Two weeks ago Tom and I set off on our week long adventure to the amazing city that is New York. It really was a dream come true. Jumping a yellow cab from JFK to the heart of the Big Apple and seeing the skyscrapers lighting up the Manhattan skyline was mesmerising.

We arrived in New York late at night and our hotel was a few minutes away from Times Square. After an 8 hour flight we wanted to stretch our legs so after dropping luggage off at the hotel, we headed out for our first glimpse of the city and it did not disappoint. Times Square on a cold Monday night in February wasn’t too busy so we got to admire all the bright lights and ease ourselves into it.

The next morning the jet leg had kicked in and we were up at 5am. We got ready and went out for breakfast at Skylight Diner. I can’t tell you how much I loved breakfast here. We’d planned for months in advance places we wanted to see and food we wanted to try and it was just luck that morning that we somehow stumbled across it. I won’t go into too much detail about the food we ate as I’ll be doing a separate post but breakfast here was by far my favourite meal of the entire trip!

Next we went to the Empire State Building. I was expecting it to be busy here but surprisingly we got through security quite quickly and ushered into a lift to the 80th floor where the Dare To Dream exhibit is located. We then jumped in another lift up to the 86th floor for the stunning views of New York city from the Main Deck.

The rest of the day we spent popping into various shops (mostly so I could check out American food and drinks) and taking photos of various buildings and yellow cabs. There’s one thing we noticed about New York straight away and that was the smell. New York has a distinctive scent to it. It’s kind of a sickly, sweet, chocolate smell and it was everywhere. I didn’t have much of an appetite that first day and we’d booked to go to Planet Hollywood for dinner. I think I had about three mouthfuls of my pasta before admitting defeat. I did enjoy the cocktails though.

On Wednesday we had planned to take a stroll around Central Park Zoo but the weather had other plans in mind for us. We woke up (5.30am this time, thanks again jet lag) to chunky snowflakes dusting the streets of NYC. It was so cold even with our thermals and extra layers of clothing, so we decided to head to the American Museum of Natural History. When we stepped out from the subway and saw a snow covered Central Park I was completely in awe. It looked like something straight from a film. We had a little explore of the park and took some photos of the Bethesda Terrace and Fountain. 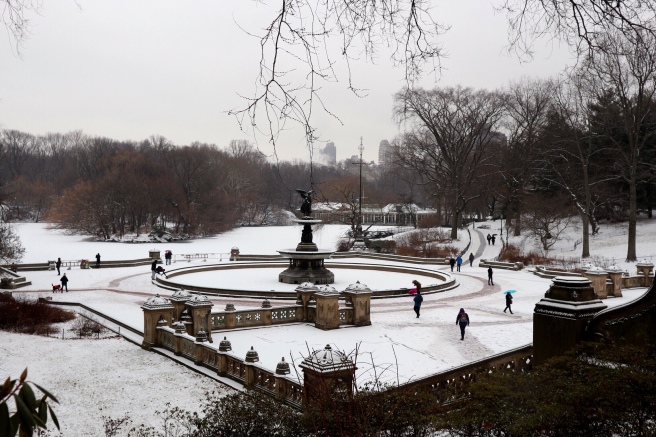 After strolling around in sub-zero temperatures, Tom managed to get me into the museum for a bit of warmth. Being fans of Night at the Museum we were hoping they’d have some of the props from the film. Nope. It was still interesting to look around the different exhibits.

For dinner that evening, we went to Bill’s Bar & Burgers and decided to check out the Rockefeller Center while we were in the area. We had Top of the Rock planned for another day but it was still pretty cool to see NBC Studios and Radio City Music Hall.

We set off to find the Friends Apartment Building on Thursday morning, which is located in Greenwich Village. I’m a huge fan of the show and although I know it wasn’t actually filmed in New York, it was still nice to see.

Trying to make the most of the lovely weather we were having, we jumped on the subway down to catch the Staten Island Ferry. The free ferry ride lasts around 25 minutes and from the deck you get impressive views of the New York harbour, skyscrapers in Lower Manhattan and The Statue of Liberty.

Despite the sun shining, being out on the deck was possibly the coldest I’ve ever been in my entire life! The views were definitely worth it though.

We decided to do Top of the Rock that evening and went to the Rockefeller Center between 4pm and 5pm and it was hectic. Luckily we’d already purchased tickets via CityPASS, but were told the next time slot was 6.30pm. This allowed us to check out the shops in the Rockefeller and St. Patrick’s Cathedral which is just across the road. 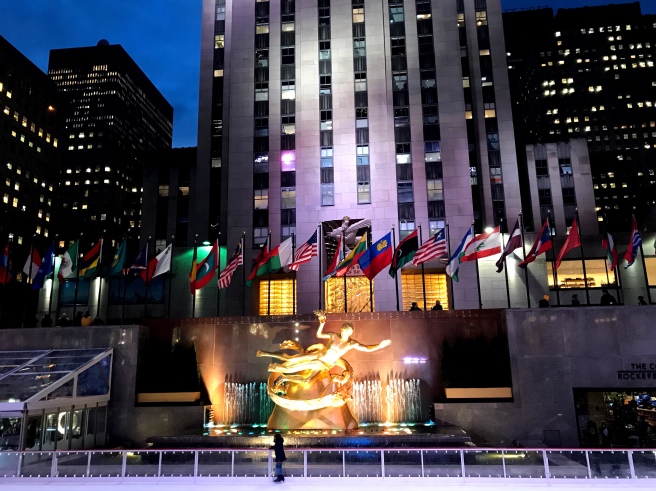 Given how easy the process was for the Empire State Building, we were kind of disappointed to be left waiting around so much for Top of the Rock. Even when we went through at 6.30pm, we still had a bit of a wait. I guess it’s because a lot of people want to see the city lights at night and I can’t blame them, the views were more than spectacular.

So that’s part one of my trip to NYC. Part two is coming soon. Let me know in the comments if you’ve been to New York and if you have, what was your favourite thing about it?

4 thoughts on “A Week in New York City: Part One”

I’m Nicola, a UK lifestyle blogger from Liverpool with a love for food, photography and anything nautical.

Want to get in touch? fishbowllifeblog@gmail.com